What is blowing up those Russian bases in Crimea? 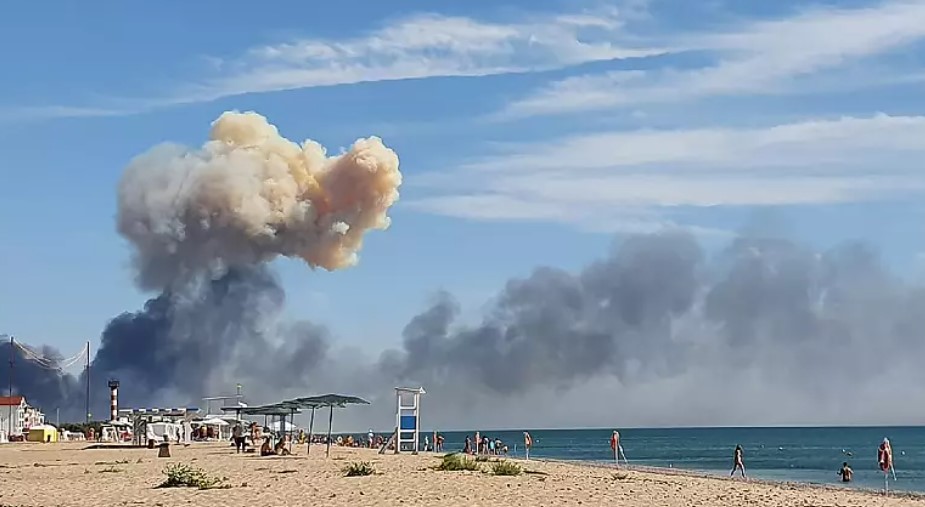 A pair of strikes against Russian bases in Crimea, well behind the Russian military’s lines in Ukraine, sent shockwaves through observers of the ongoing conflict. The damage was obvious, but what remains shrouded in questions are how the attacks were pulled off.

The last two weeks have witnessed major attacks on Russian facilities in Crimea, but the mechanism of the attacks remains a mystery. Are Ukrainian special forces infiltrating Crimea? Are missiles or aircraft penetrating Russian airspace? What is the role of sloppy Russian munitions procedures?

So far, there have been two major attacks. The first, and larger, attack was against Saki airfield in central Crimea on Aug. 9. That attack caused four massive and many smaller explosions, captured on video, and open-source imaging shows at least eight aircraft destroyed on the ground. The second attack on Aug. 16 struck an ammunition depot and possibly another airbase. Russian sources cite civilian casualties, and videos show Russian teams clearing debris and unexploded ordnance.

The attacks seem likely to continue, but the attack mechanism is a mystery. No single explanation is consistent with all the known facts. To help clarify that mystery, let’s look at five possible mechanisms for what is happening behind Russian lines.

Theory one: An accident. The first theory doesn’t involve Ukrainian action at all, and frankly seems the least likely. Russia blames the first incident on an accident ― careless operations causing an initial explosion that led to secondary explosions.

Secondary explosions occur when an initial explosion causes other nearby munitions or fuel to explode. There is no question that the largest explosions were caused by masses of munitions going off at the same time, not by a single explosive. Open-source images show large craters where two warehouses and parked vehicles had been, and one video appears to capture the dynamic of a small explosion followed by a much larger one. Earlier reports had noted sloppy munitions storage procedures that allowed storage of loose ammunition and fuel near aircraft. So, the Russian explanation is not completely impossible.

However, it is highly unlikely that this is the complete explanation. Damage is spread over a wide area implying multiple causes, not a single accident, and whatever caused the damage seems to have had multiple aiming points. Further, aircraft right next to the explosions are untouched while aircraft further away are shattered. It is not impossible that debris skipped over some nearby aircraft and landed on others farther away, but it seems unlikely.

So, if the official Russian explanation is implausible, we are left with the obvious conclusion: that Ukraine took some form of direct action against these targets. The question then becomes what that action looked like.

Theory two: sabotage on the ground. The leading explanation is that Ukrainian special forces or insurgents caused the damage. The Ukrainian government has put this forward, and Russia explicitly blames “saboteurs” for the second blast. This is certainly possible; teams could infiltrate the airfield or ammunition depot and plant charges.

However, there are three problems with such an explanation. In the Saki airbase attack, the major explosions occurred over the course of almost an hour. Special forces teams would need to have been running around the airfield unopposed for at least that length of time, but there is no indication that Russian security forces engaged anyone or recovered any Ukrainian equipment. Such freedom of movement for a saboteur force is not impossible given Russian failures to follow military doctrine and tactical procedures over the course of this war. However, it would be a shocking lapse of Russian security.

Another problem with this theory is that Crimea has a large Russian-speaking population that is generally sympathetic to Russia. A Ukrainian special forces team would find it hard, though not impossible, to hide for any length of time among this generally hostile population.

Finally, the Ukrainian government has a lot of incentive to dissemble. Maybe it is covering for the actual attack mechanism. Maybe it is trying to spread fear in the Russian rear areas. Truth is the first casualty in war, and the Ukrainians would benefit greatly in pushing the PR message of successful resistance to the Russian invaders.

Theory three: long-range missiles. Long-range fires are another possibility — but what type? Ukrainian forces are about 150 miles away from the targets, but GMLRS rockets, which the Ukrainians possess in large numbers, have a range of only 45 miles. Even the extended range GMLRS, currently in development and possibly available in prototype, has a range of only 90 miles.

Some commentators have speculated about ATACMS, GMLRS’s big cousin. That missile has a range of 180 miles and can be fired from a HIMARS launcher, which the Ukrainians already have. The missile could strike central Crimea from the current Ukrainian front lines and has the necessary explosive power to cause the damage seen.

However, the United States has stated that it would not supply this long-range missile to Ukraine, over concerns that it could strike targets deep inside Russia and thus escalate the conflict. Further, DoD spokespersons have stated that no US weapons were involved. While such spokespersons could be dissembling — did third parties provide the weapons? — the denial is plausible. ATACMS is so visually different from the guided MLRS rocket, and the attacks were so well documented, it seems likely some sign of the weapon’s existence would be appearing on social media.

Other observers have speculated that Ukraine has adapted long-range naval missiles for land attack, and that’s possible. The United States has frequently adapted missiles for other uses, for example modifying the Tomahawk land attack missile and the SAM-6 anti-air missile to anti-ship missions. Ukraine would find this challenging with its smaller defense technology base and a war-disrupted economy, but the country has proven capable of on-the-fly military developments, so it cannot be ruled out.

But social media raises an overarching issue with the theory that the explosions were caused by missiles: There are no reports of anyone seeing a low flying missile, and to cause this level of damage, Ukraine would need to have fired a dozen such weapons. The lack of reports doesn’t preclude the possibility of missile strikes but, given the many social media postings available, it seems likely that one of them would have mentioned missiles flying overhead.

Finally, missiles don’t disappear when they strike their targets. Missile bodies remain at the site of the impact and can be analyzed — and usually show up online, posted by interested bystanders or spotted by open-source imagery.

Theory four: Unmanned strikes. Another possibility is drones. They could, in theory, strike the airfield with onboard weapons or by diving directly onto the target. The problem with this theory is range. All the US-provided kamikaze drones like Switchblade or Ghost Phoenix have relatively short ranges, not nearly enough to reach central Crimea. The TB-2 drone, which the Ukrainians use extensively, has very long endurance but is limited to about 150 miles range because of communications. A strike in central Crimea would be at the far edge of what could be controlled. Because each TB-2 carries a maximum of four missiles, probably four or five drones would be required to hit the many aiming points implied by the overhead photographs. Further, these drones are slow and visible. Someone would have seen or heard them.

Ukrainian insurgents might have flown a smaller, commercially-derivative drone from the local area. The Ukrainians demonstrated that capability in a July attack on Russian Navy headquarters, and a similar attack reportedly took place on Aug. 20. However, to cause the level of damage seen in the airfield strike, the Ukrainians would need to have expanded greatly both the number and firepower of these drones. Dropping hand grenades from a small drone makes a dramatic political statement, as happened in the July and August attacks, but is not enough to level an airfield.

Theory five: Ukraine’s Air Force gets revenge. A final possibility is that the strikes came from Ukrainian aircraft. A guided bomb like a JDAM could do this kind of damage. A few aircraft could carry the dozen bombs necessary to strike the aiming points indicated in both attacks. Although Ukraine is not known to have JDAMs, the United States may have quietly supplied them, since they are relatively easy to use. Indigenously produced munitions might also have the needed capabilities, or weapons could have come from another European ally, given how few of the NATO nations have been open with what they are sending to help Kyiv.

The problem is that the aircraft would have had to fly low to avoid engagement by Russian air defenses, and none of the social media reports cite low-flying aircraft. Further, at some point the Russians would have spotted the aircraft on their radar because the targets are deep inside one of Russia’s most highly defended areas. Even a lax air defense system would have responded to a second attack.

Why it matters: As is obvious from the above rundown, none of the conventional theories about the strikes work particularly well. My best guess, despite the lack of social media coverage, is that long-range missiles or drones conducted the attacks. ATACMs supplied by third countries would be that simplest explanation, but if that comes out, the US will have been caught lying, whatever spin spokespersons put on their statements. Special forces attacks, the favorite Ukrainian explanation, are extremely difficult to pull off, and the Ukrainian Air Force seems too weak and unsophisticated to conduct such as deep strike. Important pieces of information are clearly missing, which makes the analysis difficult.

Now, some might ask why it matters how the strikes happened. The answer, at its simplest, is the vector of the attacks will guide how Russia responds. Russia will need to take countermeasures of some sort to guard against attacks. Those countermeasures, whether beefing up base security or enhancing radar surveillance, will take resources away from the front lines.

And understanding how the attacks were conducted means we can predict where future attacks might be targeted — and be confident, after the clear success of the Saki operation, more attacks are coming. Though no individual strike will be decisive, such attacks could cumulatively damage the Russian military effort. Russian losses from the two attacks so far are real; losing eight front-line combat aircraft hurts, and the aircraft will be irreplaceable for many years. The attacks also bring the war home to the average Russian, reminding them that waging war on a neighbor has a cost. The viral video of anxious Russians leaving their Crimean vacations because of the attacks at Saki shows that the Russian people are learning this lesson.

Although the cause of the attacks is a mystery to us, the mystery has an answer, and the Russians know what that answer is. Radar surveillance, observer reports, and bomb damage assessment have given the Russians a lot of data, certainly enough to make a clear case for one attack mechanism. At some point, likely soon, that answer will come out.