US unit with heavy equipment moves through the Netherlands 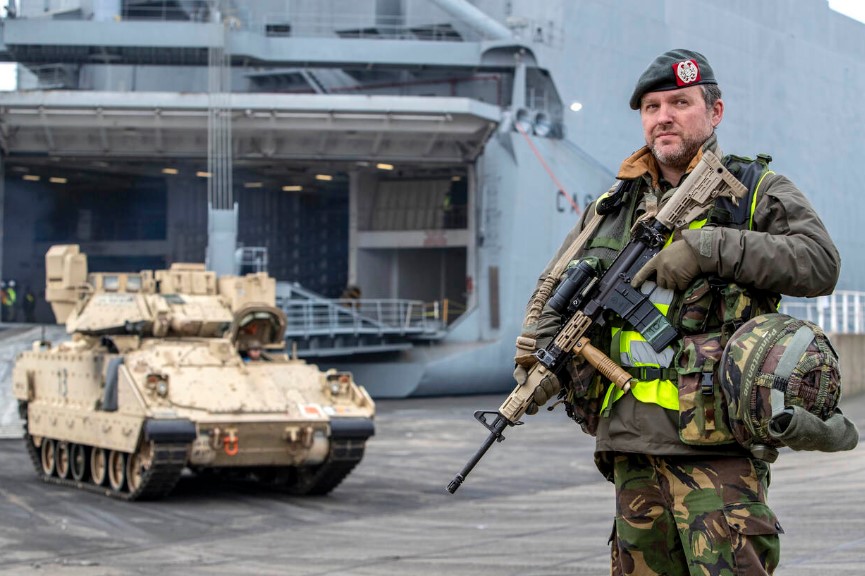 Hundreds of US M1 Abrams tanks, Bradley infantry fighting vehicles and other equipment has started driving and sailing through the Netherlands. In total 1,275 vehicles from a US land force unit going to Poland and Lithuania. The transport will last until early February and will be supported by Dutch military personnel.

The equipment arrives at Vlissingen port from where it continues by road, rail and water. The transshipment site is designated as a ‘Temporary Military Object’ this period.

Day and night surveillance
The site is guarded day and night by the army. Navy units provide security on and in the water. Other Defence units are also providing support. For instance, the Defence Traffic and Transport Organisation organises the transport of US personnel, and the Air Force and Marechaussee support surveillance and security. US personnel handle their own equipment.

The so-called Host Nation Support (HNS) has been requested for the US 2nd Armoured Brigade Combat Team of the 1st Cavalry Division from Fort Hood, Texas. This brigade is going to Poland and Lithuania for six months as part of the reinforced military presence on the eastern flank of NATO territory. The unit is relieving another US brigade here.

Good infrastructure
Delivering HNS to allies is agreed to within NATO. The Netherlands is a logical and important logistics partner thanks to its good port facilities and infrastructure. The HNS operation is coordinated from the Territorial Operations Centre (TOC) of the Royal Netherlands Army in Utrecht.

The Netherlands is the gateway to Europe for western NATO countries outside the EU. US troops in particular increasingly use the Dutch ports. The reason is the deteriorating security situation in Europe.

Source: Ministery of Defence The Netherlands