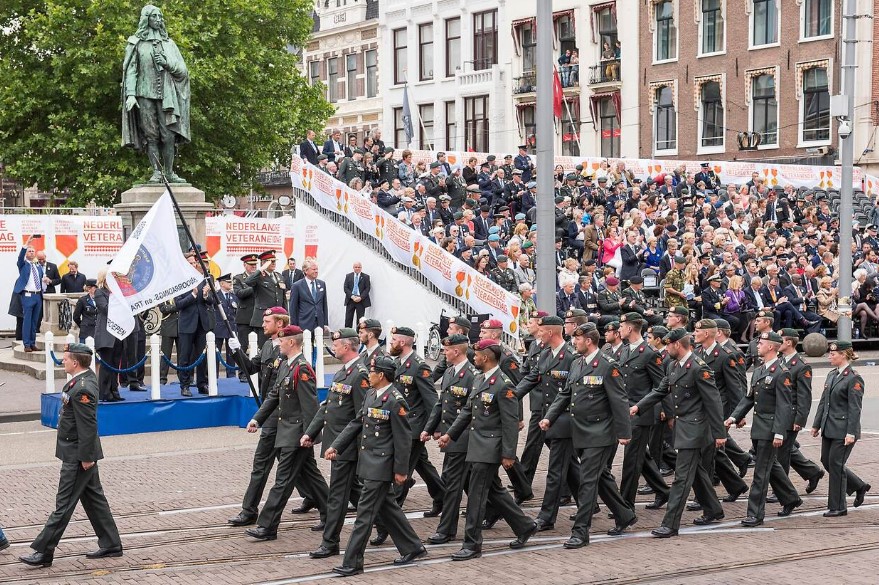 Time and again they rose above themselves. They risked their own lives to protect those of others.

Four F-35s raced over the centre of The Hague. The so-called flypast was part of the tribute to the thousands of veterans. They had come together for The Netherlands Veterans Day. For many a comradely reunion, sometimes after many years.

The day was sometimes serious, but mostly cheerful, with music, a bite to eat, a drink, a laugh and sometimes a tear. With great public interest, some 100 detachments made up of more than 3,000 soldiers marched through the Hofstad since the ‘coronastop’. These men and women have been deployed for combat operations, special operations, clearing improvised explosive devices or peacekeeping all over the world.

Applauded
Today was their day, cheered on by part of the Dutch population and by colleagues in the air. Because not only F-35s were part of the flypast. Also historical aircraft, such as Harvards and a Beechcraft and some helicopters were part of it. King Willem-Alexander took part in the parade. Earlier that day, during a private ceremony on the Hofvijver, he attached a ‘cravate’ to the banners of 18 units. This is intended as an award for military actions in Afghanistan.

Not an everyday occurrence
Such a large-scale moment of awarding honours is by no means commonplace. The last time this happened on such a large scale was on 17 November 1913. At that time, 13 regiments received banners with inscriptions. Queen Wilhelmina presented them on the Malieveld. “In the past, the banners were a point of orientation amidst the chaos on the battlefield. An indication of where one’s own unit was located,” explained Defence Minister Kajsa Ollongren. “They have not had this function for a long time. Yet the banners and standards are still of great significance. They form a link with our rich military past and with the Royal Family. And they are a symbolic landmark for what our military have been capable of.”

Life in the balance
Ollongren went on to say that this also applies to the soldiers who have dedicated themselves to peace and security in Afghanistan for 20 years. “Time and again they rose above themselves. They risked their own lives to protect those of others.

Ollongren said that this happened in a complex society in which the difference between friend and foe was often not clear. “It is about the brave performance of combat units on the ground and from the air. And also supporting units such as the artillery, the engineers, the liaison troops and the supply and transport troops who have distinguished themselves.” The Regiment Technical Troops and the Regiment Medical Troops received a banner inscription for the first time.

Ollongren also addressed the disappointment over the departure of troops from Afghanistan, a year ago this week.” Among other things, it left behind a generation of Afghans who have lived in relative freedom, where girls could go back to school. “With the Taliban taking power, the work of our military has been partly undone. This is particularly painful for the soldiers who were injured in Afghanistan and the relatives of those who were killed. Our thoughts are with them today.

The Netherlands has more than 100,000 veterans.