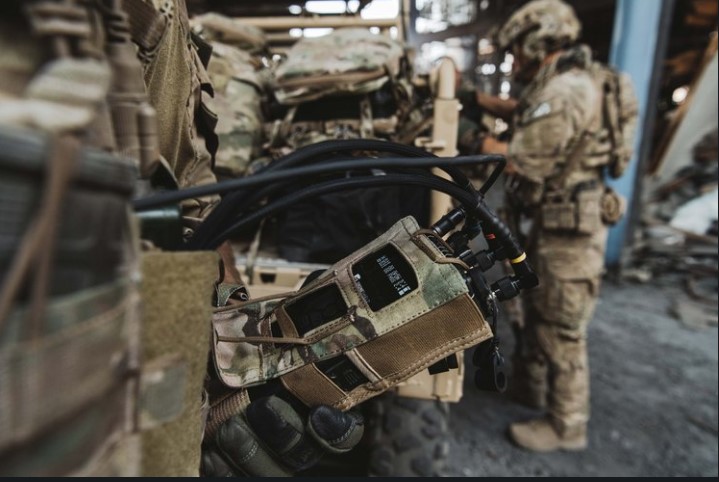 While the proliferation and beneficial applications for drone use increases, this growth equally increases the opportunities for bad actors to leverage these capabilities to carry out less than desirable operations.

Counter-UAS technology is still a relatively new industry and has only emerged with sophisticated offerings in the past few years. In less than a decade, just as with the UAS industry itself, the need for Counter-UAS capabilities has expanded to essentially every industry. Military, law enforcement and prisons might be obvious markets for C-UAS, however increased activity and threats have demonstrated the vulnerability that airports, critical infrastructure, and large public venues worldwide now face as well.

Perhaps no technology with military or “dual-use” application has evolved as quickly than the use of inexpensive drones, illustrated by their game-changing impacts on the battlespace during the Nagorno-Karabakh, Syria and Ukraine conflicts. State actors such as Russia, China, and Iran as well as non-state actors and terrorist groups like ISIS have developed and or demonstrated drone capabilities leveraging small UAS for military application. As the advances in drone technology and doctrine continue apace, the need to protect personnel and critical assets with layered and integrated counterdrone systems grows more urgent.

The Russia-Ukraine war is quickly becoming a textbook case study for the military application of drones. With all the tragedy, devastation, loss, and the high stakes of the conflict, it has also become a testbed for new military technologies.

The drone threat on the battlefield is here and quickly evolving, as currently seen in Ukraine and the Armenia-Azerbaijan conflict, and previously across the Middle East. Military and Border Security forces confront an escalating number of nefarious drones from both near-peer adversaries and asymmetric combatants, boasting increasingly lethal capabilities as technologies advance.

UAS serve as a new platform and delivery method for conventional threats such as payloads and surveillance.

The speed of capability advancement for even modest Commercial-Off-The-Shelf (COTS) drones provides a sobering example. In 2006 DJI was founded in a dorm room at the Hong Kong University of Science and Technology. A mere 16 years later, COTS drones, like DJI, today provide ISR, contraband delivery, direct attack, and fully autonomous flight against personnel and strategic assets. Russian Army General Yuri Baluyevsky said in August 2022 that the DJI Mavic’s capability to spot for accurate indirect artillery fire proved “revolutionary” in Ukraine.

Modern warfare and tactics will continue to evolve. With two recent, full-scale wars, and the current fight in Ukraine, we now see asymmetric warfare tactics being adopted quickly by conventional forces.

Drone Use in Ukraine

Small to medium drones play a major role in the Ukraine war. 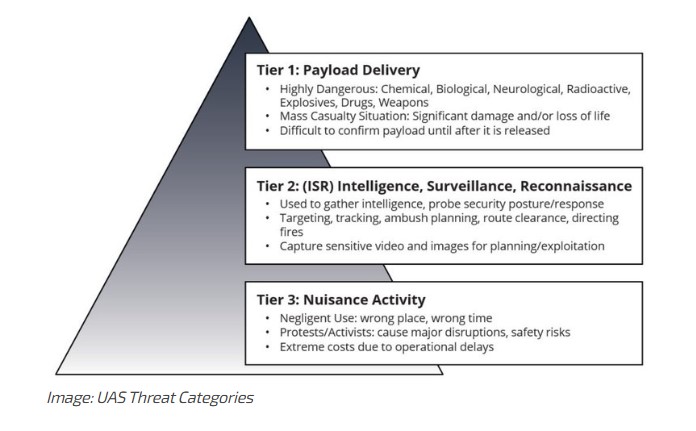 Russians use the following small/tactical drones: 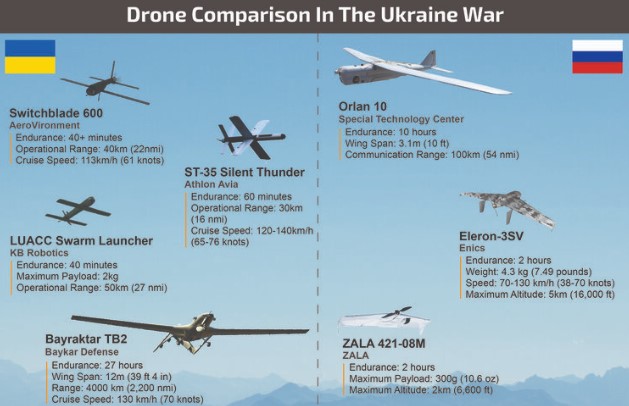 Observed Russian procedure is that if any one of the three aircraft were disabled, the other two would immediately return to base. All Orlans are fitted with a parachute for recovery. One exploit being considered by DroneShield is to activate the parachute using a method of protocol injection—this is yet to be developed but would be of extremely high tactical utility if fielded

Ukrainians most famously use the Turkish-supplied TB2 Bayraktar, following their successful deployment by Azerbaijan in Armenia against the Russian supplied ground-defense Pantsir systems and tanks as well as in the Middle East. Prior to the war, Ukrainians planned a local manufacturing line for TB2s near Kyiv.

Some drones are designed and manufactured in Ukraine, such as: 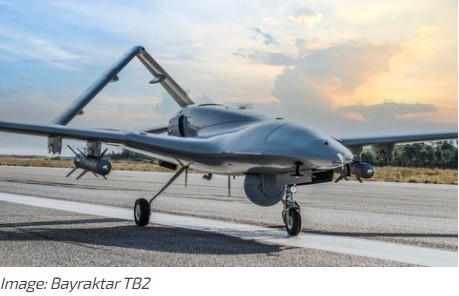 Another recent drone innovation deployed in Ukraine is the small loitering munition, in this case the AeroVironment Switchblade, a low-cost flying smart bomb launched from a man-portable tube in the field and capable of destroying a tank.

Ukraine’s deployment of drones has been acknowledged as one key enabler of their asymmetric successes in defending against Russia’s overwhelming advantages in men and materiel. Open-source intelligence confirms Ukrainian drones dropping charges on Russian armored vehicles and scouting enemy positions with great success.

Russia expected a short war won through a lightning special forces leadership decapitation rather than an extended combined-arms conflict. This provided time for drone operators to learn how to maximize their destructive potential.

The Nagorno-Karabakh conflict and the Ukraine war demonstrated that drones (large and small) will be an integral and growing part of warfare in the near future however drones alone cannot win a war. Rather, drones have proven themselves as effective force-multipliers within combined-arms warfare, increasing the impact of infantry, artillery, and heavy armor—along air, sea, space, and even cyber domains.

Drones in a military conflict setting have proven challenging to defeat kinetically, either because of ineffectiveness of kinetic systems against swarms of small, fast moving drone targets, or due to cost asymmetry on ammunition or the actual system cost, vs cost of the drones.

Early counterdrone efforts fell into two categories at either end of a price/complexity spectrum. Low end systems solved only a tiny fraction of the overall counterdrone problem or compromised performance unacceptably to achieve cost-effectiveness. High end systems offered by traditional defense firms, frequently designed originally for broader purposes such as Electronic Warfare, were too expensive to be widely fielded (as well as being attractive targets to hit) and too complex for intuitive use by nontechnical end users.

This divide was on display in Ukraine, where the Russians deployed full-scale EW such as their vehicle-based systems, which are vulnerable targets and too expensive to field in quantities sufficient to provide ubiquitous protection.

On the other hand, the hand-held and portable units appearing in public reports seemed almost ‘homemade’. Such basic jammers likely jeopardize operator safety. Effectiveness is also in question; while signal jamming has been around since WWII, maximizing drone neutralization in the real-world today demands advanced intellectual property in waveform/antenna design, jamming signal effectiveness and effective heat dissipation.

How effective are Western counterdrone systems against Russian drones? Due to numerous factors, including the degradation and compromise of the Russian military-industrial base, there is widespread use of imported commercial components in Russian military systems. As an example, key Orlan-10 hardware is comprised of commercially available components from China, Europe, and the U.S. Counterdrone systems like DroneShield’s, which focus on commercial drones and components, are likely to be highly effective against threats like these for both detection and defeat. 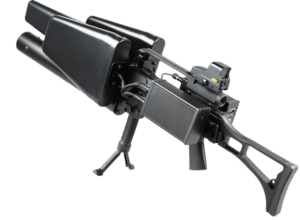 MSS Defence has a long history and expertise in ccounter drone solutions. Since 2011 we have been advising customers how to cope with hostile drones, also known as remotely piloted aerial systems (RPAS) or unmanned aerial vehicles (UAV).