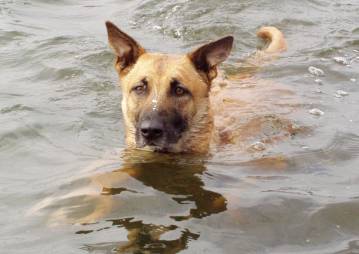 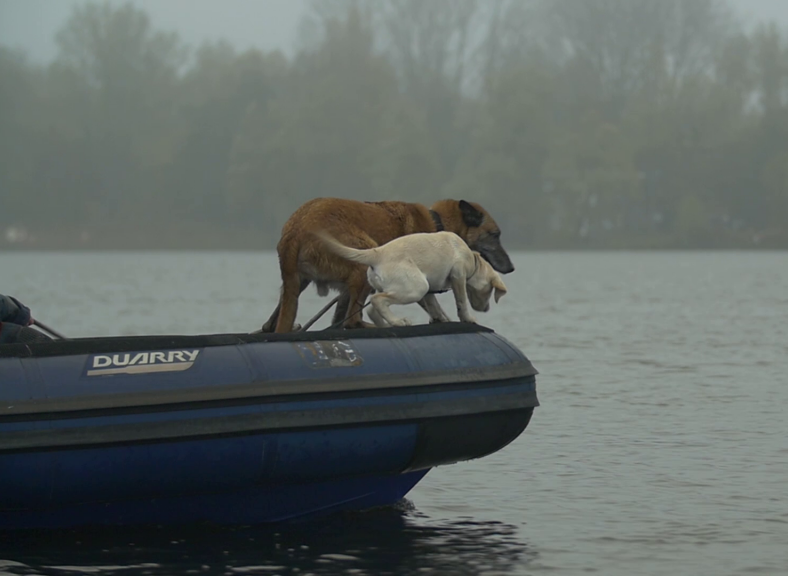 If the opening scene of a film does indeed hold a promise about what is to come, then the viewer of SEARCH! The Woman, The Dog And Death (71 min) immediately knows to expect what is coming. A woman and her dog. Searching. Soon the dog starts barking. He has found something. “Handsome!” she says. ‘Neat!’ She calls the police. ‘Yes, good day, Esther van Neerbos, Signi Search Dogs,’ it sounds routine. ‘We searched for Ibrahim today. We found him. So you best come here.’

Veterinarian Esther van Neerbos of the Signi Search Dogs Foundation, searches for missing people in her free time together with volunteers and her five dogs. Her dogs are specially trained in recognising dead air, especially dead air under water. Thanks to Esther’s tireless efforts, she regularly solves missing persons cases and puts an end to the uncertainty in which those left behind live.

In the Netherlands, between 16,000 and 20,000 people are reported missing to the police every year. The vast majority of these are found within 48 hours or return home. A small proportion of missing persons are not solved within a few weeks and several dozen disappear for good every year. 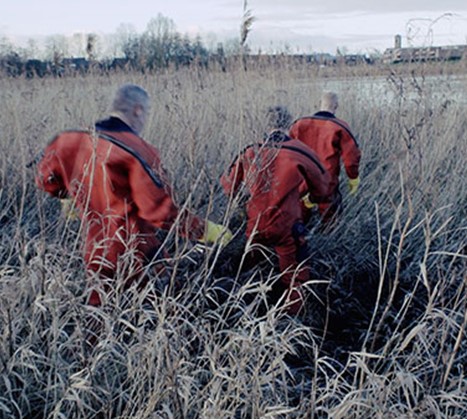 The fact that the police stop searching, and in some cases start searching at a later stage or not at all, is intolerable for those left behind in a missing persons case. The deployment of SIGNI Search Dogs is the only chance for many family members to find out what happened to their loved one.

The home base of Esther and her partner Janette is in the woods near Helmond.  With their five dogs, they eat, watch TV and sleep before another work-and-seek day. Every day, Esther trains the dogs before dawn. Janette makes sure the veterinary clinic they run together runs smoothly and that everything is ready before the first patients arrive. In between consultations, Esther coordinates searches around ongoing and new missing persons cases.

Every weekend, Esther goes searching for missing people, but her search efforts regularly brings her into conflict with a government struggling with the phenomenon of citizen sleuths. She has conflicts with agencies that hand out fines, trying to make her search impossible. The home front also creates pressure. with Janette wanting Esther to spend less time searching. 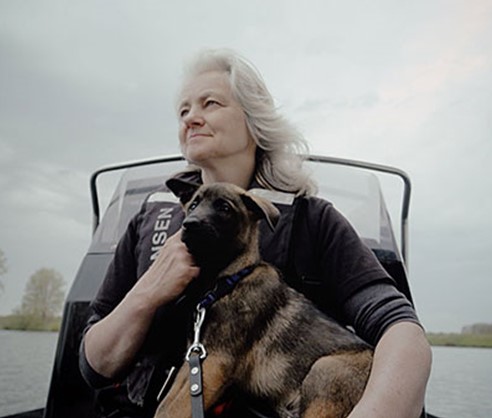 Filmmaker Mariëtte Faber follows Esther during her impressive struggle for the survival of her search practice.

KRO-NCRV 2Doc: SEARCH! is directed by Mariëtte Faber and a production of Windmill Film in collaboration with KRO-NCRV, with support from the CoBO Fund.

The documentary premiered at Film By The Sea and came second in the audience survey.

Review of Documentary on Dutch television about SIGNI Search Dogs

The track is set for what will be an exhilarating, cinematic and also shocking film. For five years, director Mariëtte Faber follows veterinarian Esther van Neerbos, her colleague and partner Janette Kruit, their five specially trained dogs and the more than 50 volunteers of their foundation. In their spare time, they search for (long-term) missing people. At the same time, however, Signi has to fend off the labour inspectorate. Like the police, it is finding it hard to get used to the idea of citizen sleuths – and the fact that they do not comply with all health and safety regulations, such as the agreements on working conditions for divers.

Faber joins some searches by Signi Search Dogs for Dutch people who have had a fatal accidents, were murdered or – in the vast majority of cases – ended their lives themselves. lives. Thus, the film crew is there when Van Neerbos and her remarkably professional team search the Stieltjeskanaal for the car of a 55-year-old woman from Erica in Drenthe. When they determine with sophisticated equipment that there are indeed vehicles in the water, these must be ‘dived’. So that it can be definitively established whether the woman is deceased in that location. Then there remains a job that is both very important and god-awful: informing the informing the next of kin.

Beforehand, this documentary already has what it takes: an appealing protagonist with a clear and socially relevant mission, who also operates within an exciting setting and finds the necessary obstacles in her path in the process. At the same time, SEARCH! is also ‘just’ a particularly cleverly made film. Signi’s searches – by dog, by boat and/or via a diving team – are recorded serenely and with an eye for detail. Faber guards against zooming in too much on unsavoury details or to depict the idealistic undertaking, where it is indeed questionable whether it belongs to the duties of ordinary citizens, to portray it as one big success story.

Gradually, the documentary also gets closer and closer to Esther and Janette. The complementary duo who raise dogs from an early age with the smell of death (which they have to come to love, in order to later function as search animals). As the  inspection continues to complicate their work, they also have to deal with personal misfortune. Then this spot-on film begins, partly through subtle use of music, begins to work more and more on the feel, without derailing for a moment.

You can view the documentary in its entirity by following the link below.