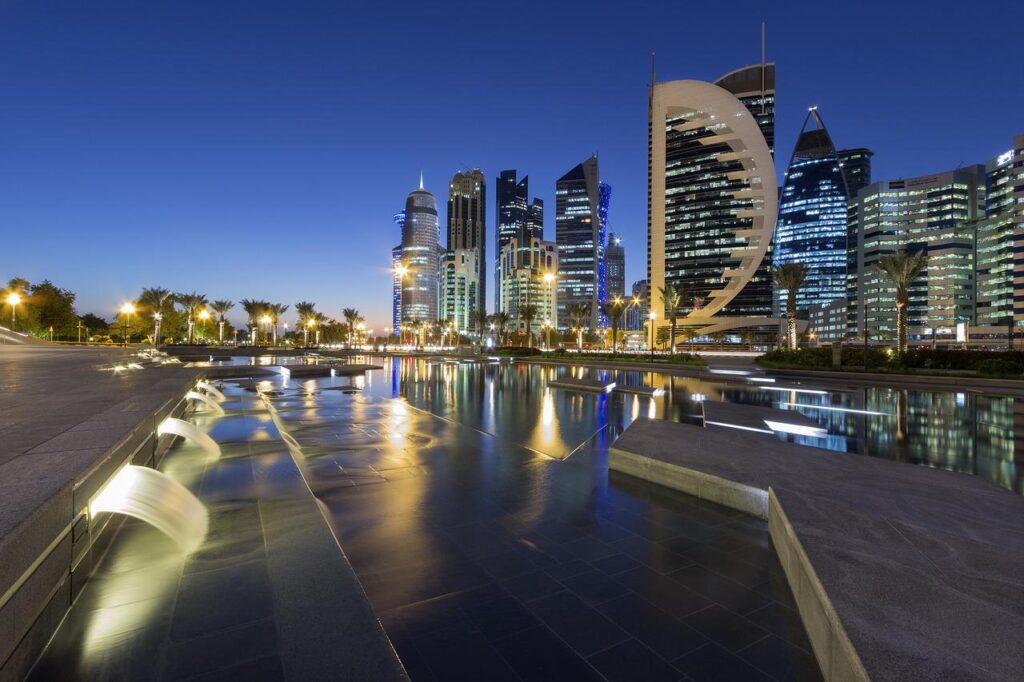 With the 2022 FIFA World Cup just months away, Qatar has taken delivery of its first batch of Eurofighter Typhoons, the latest major acquisition by the Gulf nation that will help beef up security for the competition.

The planes were included in a grand ceremony in at Dukhan / Tamim Airbase on the western side of the peninsula just days ago that also featured F-15QAs, the NH-90 tactical transport helicopter along with its naval counterpart, and the Rafale fighter. The Typhoons will be part of the Joint Typhoon Squadron, also known as 12 Squadron, which is run in partnership with the United Kingdom. The squadron will provide air security for cup while it runs from November 21 to December 18.

There haven’t been any well-publicized security threats to the country, and Middle East analyst Andrea Krieg said generally Qatar maintains friendly relations even in a reliably volatile region. “This makes it unlikely that any state actor or proxy would try to exploit the World Cup for any malign activities,” he said, adding that the country is also well-positioned against asymmetric threats like terrorist attacks (even if the UK acknowledges those “can’t be ruled out”).

Still, such high-profile event requires planning for the worst, and Qatar has worked with international partners and acquired high-tech capabilities to boost its security in the air, at sea and on the ground. Here’s how:

The Typhoons themselves are the product of a December 2017 contract between Qatar and BAE Systems to procure 24 of the jets and nine Hawk Mk 167 advanced training in a $8 billion deal in total.

Italian firm Leonardo contributes to both the airframe and the avionics of QEAF Eurofighter Typhoon. The Typhoons are equipped with ECRS Mk0 radar, and Praetorian DASS – designed to provide protection against air-to-air and surface-to-air threats, by monitoring and proactively responding to the operational environment — and PIRATE IRST (Passive InfraRed Airborne Track Equipment – Infrared Search and Track), both led by Leonardo. Qatari airspace will be safeguarded by Leonardo’s low-level air surveillance and defense system, composed of a network of Kronos radars and associated command and control centers. The Italian company is responsible for all the Air Traffic Management electronics and meteorological equipment for the Hamad International Airport, securing the arrival of passengers from players and crowds to the World Cup.

The country is also taking delivery of NH90 helicopters from Leonardo, courtesy of a deal in August 2018. For those, the French firm Thales supplies the ENR radar, avionics, EW CATS (Electronic Warfare, Compact Airborne Threat Surveyor for helicopters), radios and Transmission Data Link. Up to date, Leonardo delivered six out of 28 NH90 helicopters in both Naval and Tactical version, and the program is on track. These additions to Qatar’s air force are operational, and the flight crews and technicians have received extensive training with the support of the Italian Army and the Italian Navy.

Speaking of navy, being mostly a peninsula with only one land border to the south with the Kingdom of Saudi Arabia, for Qatar ensuring no threat approaches from the sea is as critical as securing airspace. Therefore, Qatar has signed many contracts in recent years to procure advanced ships equipped with radars and monitoring capabilities.

As a part of its investment in security, the Qatari Navy ordered four Al Zubarah-class corvettes, a landing platform dock and two offshore patrol vessels in a deal signed in 2016 worth approximately $5 billion, built by Italian shipbuilder Fincantieri. The fourth corvette was launched late April this year at the Muggiano (La Spezia) shipyard. Each of the seven new ships are equipped with Leonardo’s combat and surveillance systems, particularly the command management system that comprises Leonardo 3D AESA Grand Kronos Naval radar, IFF (Identification Friend or Foe) interrogator and transponder, an IRST surveillance and tracking suite.

Earlier this year, and during Dimdex 2022, Qatari Navy has signed a new contract with Leonardo to develop a Naval Operation Center (NOC) for the military service, the first of its kind in the country. The center ensures navy forces monitor and control Qatar’s territorial water, Exclusive Economic Zone and adjacent waters. The center, which will control radars and sea-based tracking in real time, will include electronic warfare systems, but it’s currently unclear if it will be up and running in time for the games.

Though aircraft and ships may be used to secure much of the country during the games, of particular concern to security professional will obviously be the games themselves, which present targets for asymmetric threats like terrorism or just out-of-control crowds.

Krieg noted that the cup will bring together citizens from rival or even adversary nations – Israelis, Saudis and Iranians, for instance – which increases the risk of an incident. “This could lead to animosities being played out in Doha,” he said.

To that end, some of the most critical pieces of technology expected to be employed by Qatar include information-gathering, surveillance and intelligence systems. Kreig said Qatar has “developed an extensive integrated monitoring network complete with audio-visual sensors, drones and CCTV that is fed into the National Security Center. Here, potential risks are assessed and potentially engaged before threats materialize.” Those Thales airborne and maritime systems are also integrated on the ground there, Krieg said.

In the immediate vicinity of the stadium, Qatar is also working with the Utah-based Fortem Technologies on counter-drone strategies, the company announced in July.

Fortem CEO Timothy Bean told Breaking Defense their system, known as SkyDome, is the “best in the world with kinetic defeat when low-collateral damage is needed.” Included in the system is the DroneHunter, which, as its name suggests, literally hunts other UAVs in the sky and takes them out by shooting out a specialized net, tethering the threat and dragging it away to a designated location.

Krieg, for his part, thought that like some of the air and maritime security preparations, the drone defense likely won’t see much action, perhaps beyond rogue private drones. “Anti-drone systems are in place but will be directed against private drone use where applicable,” he said. “There will be drone-free parameters around and in the stadia, where drone use will be forbidden.”

In light of all the above, in Krieg’s view there’s relatively little threat to the 2022 games, whether from a nation-state, a proxy, a terror group or just rowdy crowds.

Since 2011 MSS Defence has been advising customers how to cope with hostile drones, also known as remotely piloted aerial systems (RPAS) or unmanned aerial vehicles (UAV). We are specialized in the detection and deterrence of Group 1 and Group 2 drones i.e. smaller type commercial drones weighing less than 30 kilograms. For custom systems or queries you can contact us directly at: info@mssdefence.com