Is Ukraine winning the war? 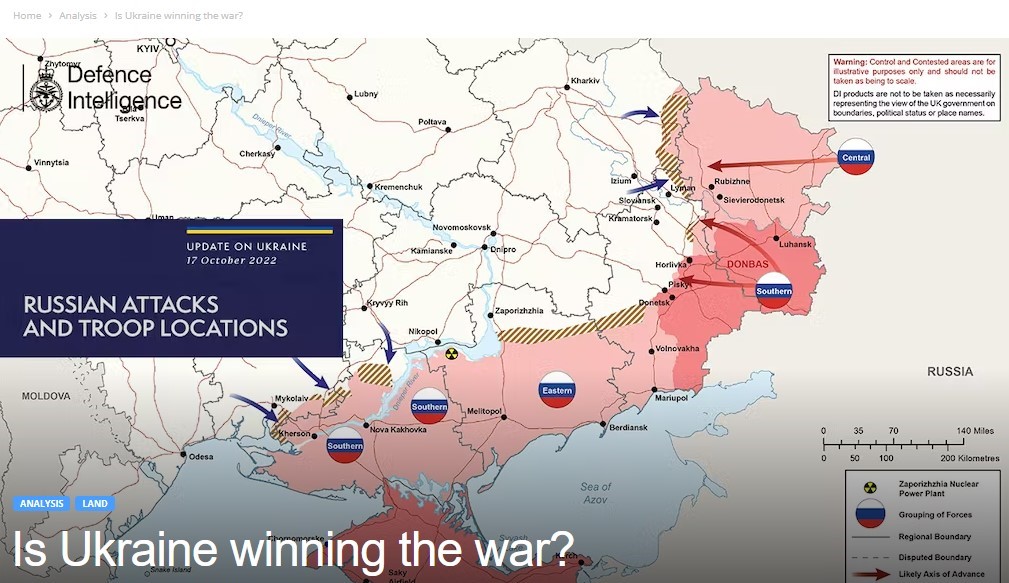 It is challenging to keep track of Russian and Ukrainian casualties because Russia and Ukraine have the incentive to conceal those numbers. On the other hand, open-source reporting has resulted in some estimates that are most likely to be within a reasonable range of the actual figure.

Many estimate Russia has lost around 2,000 tanks, many of which Ukraine has seized. The most recent offensive alone is estimated to have captured around two dozen tanks, which is sufficient for Ukraine to equip two tank companies. If accurate, the above represents approximately 66 percent of Russia’s modern tank forces. The figure, of course, does not include the 20,000 old tanks that Russia keeps in storage. Evidence suggests that Russia’s tank problems have reached a crisis level. There is confirmation that T-62s are now in combat in Ukraine.

Russia has become one of the largest suppliers of equipment to Ukraine
According to some estimates, Russia has suffered the loss of around 4,500 infantry fighting vehicles, which accounts for approximately 34% of its total force. Ukraine has also shot down two hundred fifty of Russia’s most cutting-edge aircraft, though this only accounts for about 18% of Russia’s aircraft fleet.

Additionally, 1300 pieces of artillery, both self-propelled and traditional, have been captured, abandoned, or destroyed. This figure accounts for approximately 23% of Russia’s total artillery stock. As for troops, Over 90,000 Russian soldiers have died, cannot be accounted for, or have suffered such serious injuries that they are unable to return to service, independent Russian media project iStories reported, citing sources close to the Kremlin.

Morale is getting worse, as are Russian results

Russian morale is at an all-time low, according to reports. Of course, this is not Russia’s only problem, but it is a problem nonetheless. Almost from the moment that military operations began, the Russian military was suffering from low morale. In retaliation for the high number of casualties they were suffering, one tank unit even ran over the legs of their commanders.

Following its defeat in the Kharkiv Oblast, Russia has initiated a significant nationwide recruitment effort to compensate for the number of soldiers it lost in battle. However, Russia’s partial mobilisation is indicative of the country’s realisation that it cannot generate the manpower necessary to achieve its goals in Ukraine. On the front lines at home, sanctions imposed by the West have been criticised, even within the West, as being ineffective, even though Russia’s economy is beginning to show signs of severe deterioration due to the sanctions.

Russian energy has boosted their war effort
However, this was only possible due to Russia’s extensive use of its currency reserves to artificially prop up its economy. These reserves are slowly being depleted, and the reduction in energy that Russia supplies to Europe as a result of both self-imposed energy restrictions in Russia as well as Russia’s deliberate attempt to exert pressure on Europe by cutting off gas flows has resulted in the drying up of Russia’s most lucrative source of revenue. Energy sales have been the primary factor in keeping the Russian economy afloat.

As a result of the steep drop in sales to Europe, Russia has been searching for alternative buyers, and those alternative buyers are now responsible for determining prices. For example, both China and India are stocking up on low-cost energy from Russia at prices they set and then turning around and selling it to other countries to make a profit.

German tanks, American jets, Canadian training and British intelligence
In contrast, Ukraine is gradually gaining the support from Western nations that it has required from the very beginning of its political crisis. Western governments are, for the most part, deciding whether to provide Ukraine with heavy equipment like tanks and aircraft.

The United States has given its approval for Ukrainian pilots to receive training on the F-16 and F-15. And it’s inevitable that the Ukrainian air force will be flying Western fighters within the next six to eight months. Britain, as many of you know, continues its weekly shipments of everything from anti-air missiles to ammunition. Additionally, the UK is erring ongoing intelligence information to Ukraine through the use of frequent surveillance aircraft missions to the region.

Germany is currently debating whether or not to provide Ukraine with Leopard 2 tanks. Additionally, a growing number of calls coming from within the United States could result in approval to provide Ukraine with Abrams tanks. I’m not joking. This would be huge. Alongside the US and UK, Canada is even helping to train Ukrainians to defend their homeland. Other countries, are, of course, helping in a multitude of ways.

Get to the point, is Ukraine winning?

Is it fair to say that Ukraine is winning the war? Sorry for the vague answer here, but yes and no. Let me explain. Wars don’t count as won until they’ve been fought and won. Various factors can potentially bring about a significant shift in Ukraine’s circumstances. Ukraine may be offered less support due to the growing sense of exhaustion among some Westerners regarding the situation in Ukraine.

As a result of being cut off from Russian supplies, Europe is already preparing for a harsh winter, which an energy shortage will compound. Moreover, this harsh winter may cause a significant shift in European public opinion against maintaining support for Ukraine. Let’s hope it doesn’t.

Despite all of the above, Russia maintains a military that remains a significantly capable force despite being clumsy and inept. So don’t let their failings make you think Russia is a paper tiger. It isn’t. Even a full-scale mobilisation is unlikely to win the war for Russia at this point because it would take nearly a year to organise, train, and equip new forces—time that Russia does not have. Moreover, Ukraine had been underestimated at almost every point since the start of the invasion, with many analysts and Western governments expecting the capital to fall within days. It didn’t fall. It pushed back.

Ukraine can win, but it isn’t a sure bet
However, there is a genuine concern that people will overestimate Ukraine’s capacity for success in its objective of retaking the land seized by Russia. The offensive operation in the East is still meeting with a great deal of success. However, the element of surprise played a significant role in the success of that offensive, and it is improbable that the same level of tactical surprise can be achieved again.

But I was wrong about this before, and I hope I am this time too. The conflict will inevitably devolve into a drawn-out slugfest in which Russia will play the heavyweight role. The only way for Ukraine to push Russia back toward its borders is for the West to maintain and significantly increase its support.

Ukraine is not necessarily winning, but it is a long way from losing.