eRIC 2022 – the expo for Disaster control, incident management and crisis management was held on the 18th and 19th of May at the Airport Twenthe events grounds. Between 4.000 and 5.000 visitors attended the two day event where MSS Defence had a stand together with a number of suppliers namely:

After a Tuesday busily spent preparing the stand, Wednesday dawned as the hottest day of the year to date in The Netherlands. Luckily the MSS Defence stand was equipped with two fridges and refreshments for both visitors and stand staff. The heat did take its toll on the visitors as everyone took every opportunity to make use of any available shade.

After a fruitful, and tiring due to the heat, first day an enjoyable dinner was held and attended by all the stand staff at a restaurant in Enschede. The Thursday started off cooler and overcast, and the expo itself was noticeably busier than the first day. The stand was soon busy with visitors having  meetings and discussions with the various suppliers. In the afternoon the weather started becoming more threatening and a thunderstorm was predicated for 3pm. After a number of showers earlier in the day it was decided by the outdoor stands to start packing up earlier than the official end time of 5pm. This was a wise decision as it turned, as at around 3pm a huge thunderstorm with high winds broke over the expo grounds washing out the rest of the expo.

Perfect organization and collaboration during the eRIC2022.

Excellent organisation of the combined booth at eRIC 2022. We took a lot of impressions back home. 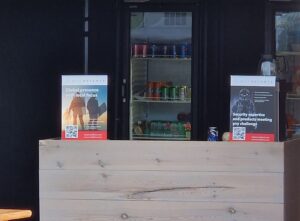 Even with the unexpected early end to expo all the suppliers had successful commercial contacts and collaboration possibilities for the future were also discussed.

All In all a very successful expo and a repeat proposal for 2023 was enthusiastically received by everyone. MSS Defence will see what possibilities there are for next year, and how it can be made better and expanded with extra participants if needed.

Read more about our Partner Spotlight. A number of suppliers, their products and services are highlighted here.